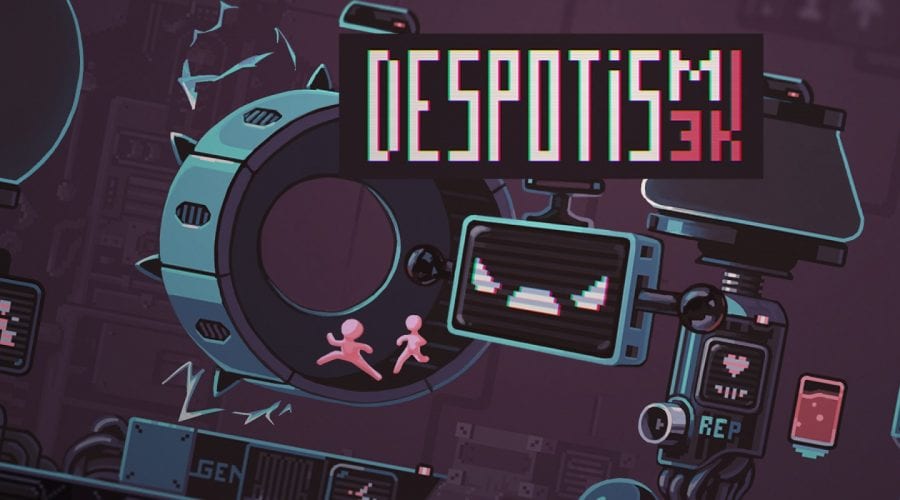 Have you ever dreamed of being an AI abusing the humanity to harvest energy? Well, your time has come. Despotism 3k is a rogue-lite game by Konfa Games that is very easy to learn but also very hard to master.

So, what’s the point of Despotism 3k?

Short answer: You produce energy with humans. You are an artificial intelligence that took control of humanity while trying your best to let them reproduce and work for you so you can produce that sweet electricity. Sounds simple at the beginning but it becomes way more difficult very quickly.

The tricky part is that you need to always have enough power in your meter on the left side of the screen. Energy is subtracted five times in a day and every time this is happening you need sufficient electricity. The game ends if you don’t provide enough of it.

Meanwhile you have to manage your humans to get relaxation, to produce energy or food, to reproduce – or you can just throw humans into the bioreactor to produce energy by recycling them. It sounds just as dark as it is.

So there are five basic ways to interact with the humans:

The pool of humans
Your humans can relax in this location and gain strength to be used again for the following purposes.

The generator
Put your humans into the generator so they can produce energy. Besides the bioreactor this is the only way to generate electricity.

The reproduction chamber
Well, what are you expecting here? You put a pair of humans into this stage and they start to … reproduce. ¯\_(ツ)_/¯

The food producer
It looks pretty much as this is producing hamburgers 24/7. In this stage your humans jump around and produce food by that. Makes sense, doesn’t it? And your humans will need a certain amount of food to stay alive.

The bioreactor
What do you do with weak humans if you can produce fresh ones very quickly? That‘s right – you throw them in the bioreactor so the carbon based body can be converted into electricity.

The difficulties of Despotism 3k and how it works

You have to take care of a lot at the same time – and you also have to be very fast at some times. You need to make sure that you have enough humans so that there are enough reproducing themself. Then there is the requirement to have enough energy at all time so you need to have enough humans in the generator. But don’t forget that they need to eat as well so let them produce food! And in case there is not enough energy left you can quickly generate some with the bioreactor.

But the worst of all of it: After every day you have to face something like a challenge, making this game way less predictable. The sequences are text-based and more like story telling. For example you are facing increased heat so you choose your humans to go and buy an air conditioner. While buying that air conditioner they meet a brotherhood that wants to persuade the humans to join them. So what do you do? In the end your humans are gone and the air conditioner, too… That leaves you with the heat so your humans are now 33% faster exhausted! Despotism 3k is getting more difficult that way but also way more interesting.

Its addictive. After my first few runs I understood the basic principles and tried my best to produce enough electricity while keeping as many humans alive as possible. But I failed – very often. If you like games like Dead Cells then you will have a lot of fun with Despotism 3k. It has dark humor and there’s a lot to be discovered. That‘s something that I can enjoy for hours.

How to survive at the beginning

I only made it to day 7 so far but I can tell you my technique already to get quickly to the first milestone (day 6): Invest into reproduction at the beginning and into a third arm, then fill the generator and level it up as well. Then use humans for food on demand and try to recycle as many humans as possible because that allows you to generate a lot of energy until day 6. After that it gets horribly difficult… And when you get the question about butter on day 6, pick the third option. 😉